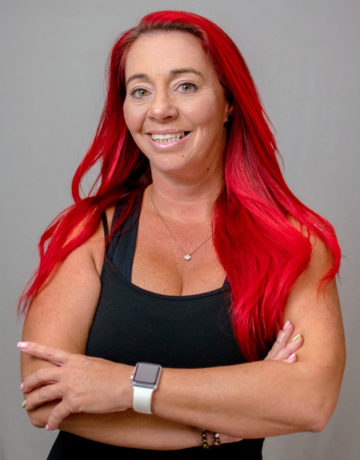 Charlene Boggs was born and raised in Florida. She started as a gymnast at the age of 4, which lead to a 9-year competitive gymnastics career with multiple State and National titles. During those final years of gymnastics, Charlene was recruited to the high school cheerleading team, where she realized her true love and passion was the combination of gymnastics, tumbling, competitions, and cheering under the Friday Night Lights. In 1998, Charlene went on to cheer at Florida Atlantic University in Boca Raton, Florida.

Shortly after cheering at FAU, Charlene began her family with the Marine Corps and has three children now ages 16, 13, & 11. While living on the USMC base in North Carolina, she started a recreational gymnastics and cheerleading program at a request from the Mayor who was aware of her athletic background. Within six months the program had outgrown the city recreational center and she found a 12,000 sqft facility on the verge of being condemned. Along with the Navy and US Marine Corps volunteering, she was able to bring the building up to code and pass inspection.

The USMC then brought Charlene to court where the USMC fought the opening of the facility due to military flight zoning. Charlene, her attorney, and her staff went up against them in a court of law and won. Tumble Mania & Cheer Mania Allstars was a competitive gymnastics and cheerleading all-star facility that remained open for years until military orders changed for Char’s family and relocated her back to Florida. Charlene has been a part of Pop Warner along with running her own program again in Orlando for 3 years. Over the course of 12 years, Charlene has coached numerous teams to championship titles all over the country.

We use cookies on our website to give you the most relevant experience by remembering your preferences and repeat visits. By clicking “Accept All”, you consent to the use of ALL the cookies. However, you may visit "Cookie Settings" to provide a controlled consent.
Cookie SettingsAccept All
Manage consent

This website uses cookies to improve your experience while you navigate through the website. Out of these, the cookies that are categorized as necessary are stored on your browser as they are essential for the working of basic functionalities of the website. We also use third-party cookies that help us analyze and understand how you use this website. These cookies will be stored in your browser only with your consent. You also have the option to opt-out of these cookies. But opting out of some of these cookies may affect your browsing experience.
Necessary Always Enabled
Necessary cookies are absolutely essential for the website to function properly. These cookies ensure basic functionalities and security features of the website, anonymously.
Functional
Functional cookies help to perform certain functionalities like sharing the content of the website on social media platforms, collect feedbacks, and other third-party features.
Performance
Performance cookies are used to understand and analyze the key performance indexes of the website which helps in delivering a better user experience for the visitors.
Analytics
Analytical cookies are used to understand how visitors interact with the website. These cookies help provide information on metrics the number of visitors, bounce rate, traffic source, etc.
Advertisement
Advertisement cookies are used to provide visitors with relevant ads and marketing campaigns. These cookies track visitors across websites and collect information to provide customized ads.
Others
Other uncategorized cookies are those that are being analyzed and have not been classified into a category as yet.
SAVE & ACCEPT